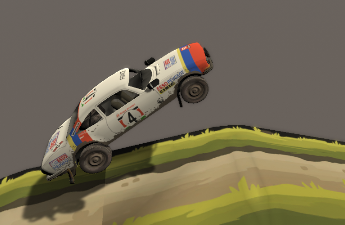 Third part of my first steps in Unity.
I guess you’re here because you want to know what I did to make my car brake? I’m about to show you my first code after hours (like, a lot of hours) of struggle to figure out how I can do thing and why the holy hell so many things I tried just didn’t work (although in those cases, I’m still not sure why).
Please remember I’m beginning, and that code is certainly not what you’d get from a pro.

First of all, here is the complete code (so far), click the picture to get it full: 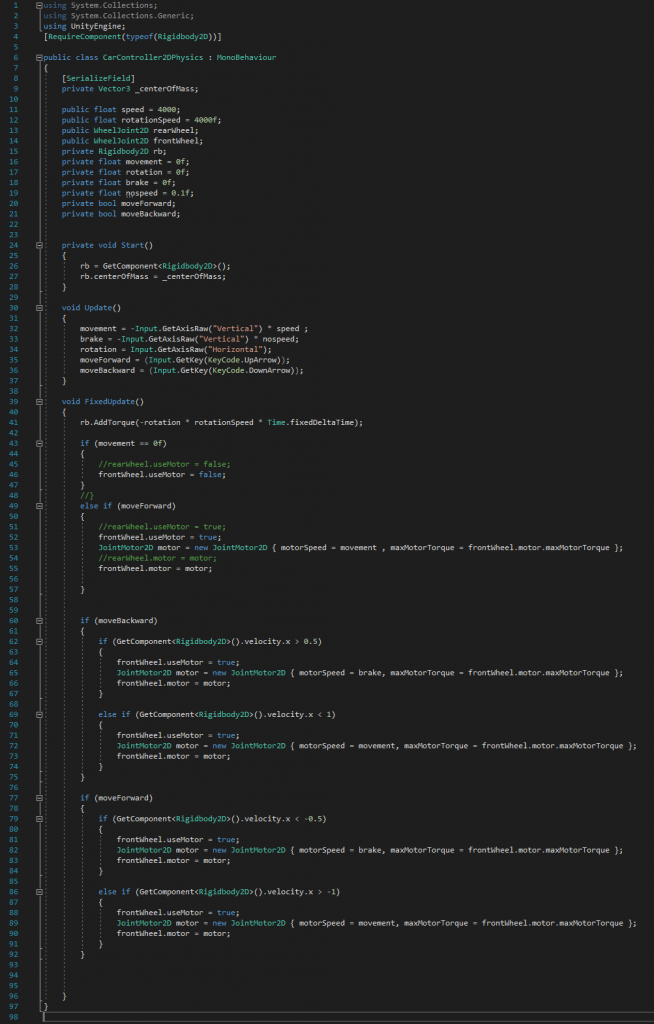 Now I’m going to describe each part the best way I can (hum…), the way I understood all of that. 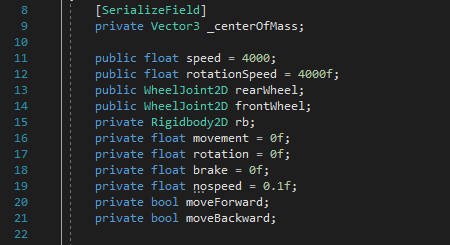 private void Start
rb = GetComponent<Rigidbody2D>(): assigned the component Ridigbody2D (which is the car) to “rb”.
rb.centerOfMass = _centerOfMass: now that rb is understood as the car, we get its center of mass.
void Update()
movement = -Input.GetAxisRaw(“Vertical”) * speed: the value of movement will be the one of speed (that I set to 4000) multiplied by 1 or -1, depending on which arrow key is pressed (up or down, considered as the vertical axis input).
brake = -Input.GetAxisRaw(“Vertical”) * nospeed: same as movement, but nospeed is set to 0.1.
rotation = Input.GetAxisRaw(“Horizontal”): used to rotate the car when pressing the left/right arrow keys (hence the “horizontal”).
moveForward = (Input.GetKey(KeyCode.UpArrow)): set the value of moveForward to the up arrow key.
moveBackward = (Input.GetKey(KeyCode.DownArrow)): set the value of moveBackward to the down arrow key.

Okaaaay, we’re all set, now time to affect the car’s behavior!
First, when to activate the motor to make the car move.

rb.AddTorque(-rotation * rotationSpeed * Time.fixedDeltaTime);: the “formula” to make the car rotate when pressing right/left arrow keys.
if (movement == 0f) {frontWheel.useMotor = false;}: It means that when we’re NOT pressing the up/down arrow keys, the motor is off.

After that, it comes to what happens when the up and down arrow keys are pressed. In each, there are 2 possibilities, depending on the speed on the car (velocity).
The problem here is that it’s for sure the wrong way to do it, it’s only a workaround as I have no idea what to use to do it properly.
Ideally, the conditions should be set on the rotation speed of the front wheels, but so far I haven’t found anything. Whereas in my case, it’s the speed of the whole car as an object. Moreover, it’s very approximate, as you can see, because I set values to the velocity (-1, -0.5, 0.5, 1) that I chose randomly, but it works! As a beginner, I can’t complain, but I’m aware I’ve done it wrong.

So depending on the velocity, the motorSpeed changes either to normal (=driving), or to 0 (=braking). Again, it is faaaaar from being good: the motor’s speed is either at its maximum, or at 0, there is no smooth acceleration nor deceleration. Got to fix that too…