Today, I’m going to talk about the Japanese house that we (my wife and I) bought 2 years ago, in February or March 2017. At last! Yea… it’s been quite a while. Why did we choose to buy instead of renting? Because we wanted our peace. Renting a flat (or house) that is too small, doesn’t have a parking space (or you’ve got to pay for it – what a joke seriously…), is too cold in winter and too hot in summer, allows you to hear your neighbors a bit too clearly (and that’s reciprocal) , can’t be (re)decorated (just making holes is a no-no), and so on… thank you but no, thank you. And on top of that, we just had had a child and some annoying neighbors, so it was time to have a bit more freedom.

Let’s be directly clear: we didn’t have our house built nor did we buy a brand new (or very recent) one. Several reasons to that: the budget, and the fact that most houses – especially in Osaka (city) – seldom have a garden/yard. I’m not meant to live in confined areas surrounded with buildings and concrete (it drives me crazy at some point), with a poor tree on the pavements begging anyone to put an end to its misery. To me, especially with a kid to raise, having some outdoor space is essential. Plus, I need green and animals in my surroundings (except those unbelievably annoying mosquitoes, and venomous snakes). And so, because we couldn’t find anything either affordable or answering our criteria, we eventually found one in another city, but still in the prefecture of Osaka (not that I particularly care).
It is called Kashiwara (City website | Wikipedia), and we are located right next to some low mountains (South of he City). Why do I precise that they are low? Because I wouldn’t be crazy enough to live near steep and high ones, as it would be a death trap in case of a big earthquake or heavenly rains (I think it’s more sent from Hell than Heaven, but hey…).
I’ll talk about the city in another post, let’s focus on the house.

Obviously, it’s a quite old house, built in the ’70s (around 1971 according to the electric cables I got from the walls), and there was (still is as of today!) a lot of work to do. At least, we’ve got some not too bad foundations, although I believe they are not reinforced. Oh yea, I feel talkative, so let’s talk about some basic stuff, so that you can understand a big more about how the Japanese houses evolved and why I did what I did (and didn’t).

The foundations of the Japanese houses
[in Japanese, it’s called 基礎 (きそ kiso)]
First of all, an important reminder: Japanese houses are mainly wooden houses. Some would say that it’s because of earthquakes (which is partly true today), but I think it’s more a heritage of their past, as the Japanese people has always been building wooden structures (for example, the round shelters half buried in the ground that look like hut, see that website where they are called “pit-dwelling houses”), and never had any knowledge about making stone houses. Remember that Japan is isolated from the rest of the world (group of islands), and that not long ago, it wasn’t developed at all (and I’m not saying that it was a bad thing, but they caught up, so whatever now). But that’s only my assumption based on what I read and have seen. You can also have a look at that website, if you’re curious.
According to that website, “Traditional Japanese architecture’s reliance on wood as a building material developed largely in response to Japan’s humid environment” (+typhoons and earthquakes), and I think it’s giving too much credit to a non-existing engineering process, therefore I can’t agree. I’ll do some more research one day and write something about that topic, it’s pretty interesting.
OK, today’s blabla is about foundations, then.

1) So at first, there weren’t foundations. But on the third day, God… erf no, didn’t happen. In the best case, the posts (vertical wood) were placed on (ground [past of “grind”]) rocks, those latter being a little bit higher than the ground, to avoid direct contact with water, obviously. Then they used concrete blocks (not the ones to build wall (although some used them!), but plain concrete in a cubic or pyramidal shape).

2) Better foundations then appeared, but still far from being perfect: poured concrete to make a “crawlspace” with some openings to let the air circulate (and avoid wood rotting), on which would the wooden structure be placed, but still leaving the ground uncovered (=visible). Why talking about the ground is important? Because it is where damp/moist comes from, and not just a little. As well as pests and crappy insects (hello termites). It is unlikely and those foundations were reinforced at all. As you can see, some wood got attacked by termites, one of the worst things than can happen to a wooden house…

I’ve seen some Japanese on the web who had companies pour a few centimeters of reinforced concrete on the soil, sealing at the same time whatever what used to hold the posts. It is a total misunderstanding of what the foundations are there for, and even if it will hold the supports in place (and prevent termites invasion and damp to some extent), it won’t prevent the house from “drowning” in case of a naughty quake. Also, concrete isn’t waterproof at all (but doesn’t get damaged by it though time, which is amazing).

3) Leveled up foundations then came up. Similar to the previous ones, but this time everything is covered with concrete, and the “walls” of the crawlspace go through the house and not just around. I’m pretty sure it’s what the house we bought got, and I believe there were few if no reinforcements.

4) Nowadays foundations, which you could call “advanced” (although I wouldn’t agree), are widely used. Those ones are borrowed (copied) from the westerners, and you might have been able so see some under construction, especially if you’re from America (a lot of wooden houses, especially in regions prone to earthquakes/hurricanes/etc.).
You must understand that houses foundations alone aren’t enough (at all!) to withstand an earthquake, and the Japanese engineers mainly focus on the house structure rather than the foundations.
So from what I’ve seen, there are three/four main steps:
– A rough concrete base is poured and then covered with a thin plastic sheet to avoid damp rising (also called waterproof membrane), it seems that it’s made in a dome shape. I’ve seen some companies doing so, some not doing that, so I guess it’s not a mandatory (especially if the ground has been well prepared, with big enough gravels and rocks to stabilize the foundation and drain whatever water might get under). In the following photo that I took, you can clearly see the sort of dome shape and the plastic sheet: 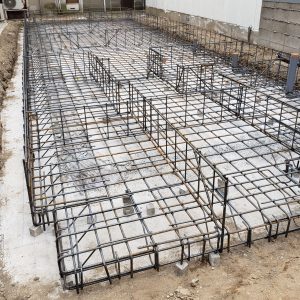 – More concrete is poured into (more) wooden forms to make the “walls” of the crawlspace, on which the frame of the house will rest.
That’s basically it.

Because temperatures rarely go very low unlike America and some other countries, there doesn’t seem to be a “frost footing”, which means that concrete isn’t poured deep into the ground (where it doesn’t freeze).

That’s it for the explanations, I hope you learned one or two things. So as I wrote, our foundations would be in the third category, but unfortunately they are cracked in half, and not something minor. We haven’t asked a pro, but let me tell you my thoughts about what I believe happened (I’m almost sure to be right about that).
When we visited the house, I noticed some big cracks that, if you look carefully, had already been refilled (and hence got larger since that time). 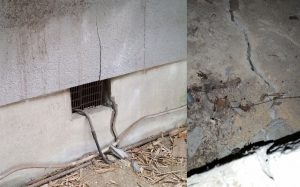 The most surprising thing is that the crack is a whole, not just a crack here and another one there, which is very surprising because – as I explained above – the foundations are poured in at least 2 times. The cracks shouldn’t have followed that perfectly, which led me to the conclusion (perhaps untrue) that the foundations were done all at once. Also, it doesn’t look reinforced, as I can’t see anything inside the concrete.
After having taken off all the old flooring, I could precisely see to what extent it was cracked, and here is the drawn result: 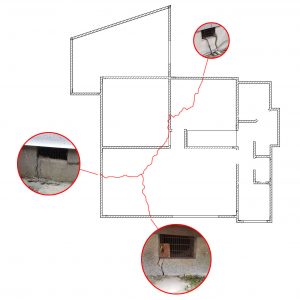 Yes, that’s quite something. Had it been a house made of stones or concrete blocks, we wouldn’t have bought it. But wooden houses work in a different way, so even unsettled foundations aren’t a thing to worry too much about.
Now, let’s see why it happened, and how I got to that conclusion.
Here are some photos of a concrete blocks wall between our land and the neighbors’:

The conclusion is that the ground is settling, which means – in scary terms – that it is collapsing. I am not sure about all the possible reasons, but here are a few.
– First, the “under” foundations, which is where your concrete foundations or even simply blocks to build walls will be placed. It has to be deep enough so that you reach a had ground that is not likely to move. Usually, for houses, that’s simply some rocks of different sizes put in a specific order (layers). For buildings, they dig deep to reach a hard stable soil and put some big metal pillars.
– Second, the weather: a lot of rain then weeks of hard heat and not a single drop affect the soil, because earth expands and retracts depending on its state. Worsened where temperatures drop way below zero. Hence good preparations before pouring the foundations. Keep in mind that water may be flowing (not so) deep under your feet, there are tunnels or cavities, it’s not just a plain solid bloc, and it affects the stability of the ground (ever heard of “sinkholes”?).
– Third, and I bet that’s the main culprit, earthquakes. Quakes tend to liquefy the soil (called “soil liquefaction”), and if one is unlucky, it can even make a building fall over. More info on Wikipedia. I think that every earthquake, even to a minimum extent, liquefies some part of the ground, somewhere, be it deep or at the surface.

So there you have it. The West/South-West side of our house went down because of some soil collapsing, which is not super safe, but not a threat either. The house being old, and fixing that issue being extremely expensive, I reinforced it and plan do more to make sure that even if it sinks down a little more, it won’t be hazardous.

2 thoughts on “My Japanese house part 1 – The foundations”